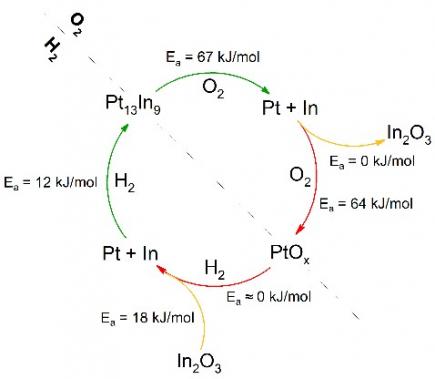 Metal nanoparticle catalysts play an important role in widespread applications, such as car exhaust converters and fuel cells, and provide a platform for the selective transformation of chemical building units in industry. During the past decades, the perception on metal catalysts has drastically evolved from static bodies to dynamically changing nanomaterials, which evolve from birth to death, almost like living organisms. Today, it is well-recognized that the concerted action of multiple atomic scale processes change and shape the working state of the catalyst, thereby influencing its performance. While pioneering studies, disclosing new mechanistic insight in the processes that influence the catalyst performance, such as nanoparticle sintering and alloying-segregation, are available, their quantitative kinetic description is typically not specified due to characterization challenges.

In this paper, the kinetics of alloying-segregation in model Pt13In9 nanocatalysts are extracted at a quantitative level during high-temperature redox cycling by in-situ quick X-ray absorption spectroscopy (QXAS). To interrogate the catalysts in their working state, a characterization toolbox has been assembled which provides ex-situ, in-situ and operando investigation of the dynamic processes at play. The resulting data allow to formulate for the first time, to our best knowledge, a QXAS-derived energy diagram and reaction mechanism, that describe the rates and driving forces responsible for reversible reduction-alloying of In2O3/PtOx to Pt13In9, and segregation-oxidation back to In2O3/PtOx. After multiple cycles, nanoparticle sintering is substantiated with large particles forming Pt nanoworm networks in oxidative atmosphere, caused by spinodal decomposition of kinetically rapid Pt13In9 segregation.

The presented work is relevant for a broad class of (bi)metallic nanocatalysts, including widely applied Pt-Rh deNOx catalysts, which undergo dynamic changes under rapidly changing redox conditions. In addition, kinetic quantification of dynamic processes by in-situ QXAS has potential applications in other fields involving (bi)metallic nanoparticles, such as medical imaging and therapeutics, as well as nanomagnetism.