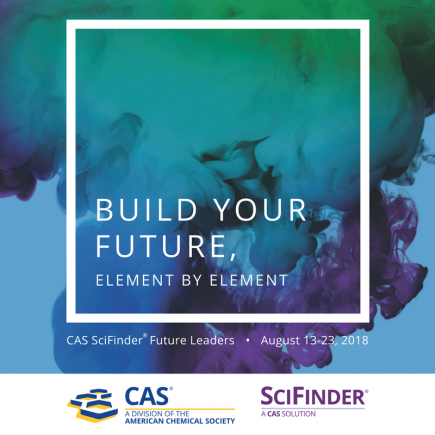 Columbus, Ohio (May 16, 2018) – CAS, a division of the American Chemical Society, announced today the participants selected for the 2018 CAS SciFinder Future Leaders program. César A. Urbina-Blanco from Ghent University has been selected as one of several international Ph.D. students and postdoctoral researchers who garnered an all-expense paid visit to CAS headquarters in Columbus, OH this August to collaborate on exciting new initiatives that support the scientific community.
The CAS SciFinder Future Leaders program aims to expand professional networks among emerging researchers, increase knowledge and exchange ideas about the role of information within the research process, and learn from industry and academic leaders about the role of science in the global economy, academia and the media. Urbina-Blanco and the other Future Leaders will also visit centers of innovation and technology in Columbus to broaden their understanding of the scientific enterprise, and also contribute to shaping the future of scientific research by sharing their experiences using information solutions, including CAS’s innovative workflow solution, SciFindern.
“CAS is privileged to connect the next generation of scientists with other leading researchers from across the globe and expand their professional research skills,” said Chris McCue, vice president of marketing at CAS. “Program participants were chosen based on their impressive academic accomplishments and the scientific merit of their research. We are honored to host the 2018 class and learn from their experience.”
The program has seen rapid growth and is now recognized as the premier program of its kind. Celebrating its ninth year, CAS received the highest number of applications across the widest geographical range since its inception in 2010. Alumni from this program have been a part of noteworthy scientific innovations and research, and are influencing future scientists through their demonstrated leadership.

The CAS SciFinder Future Leaders program provides an opportunity to expand professional networks by engaging with scientists from all over the world. Participants develop SciFinder proficiency and professional development skills, increase knowledge and exchange ideas about the role of information within the research process, and learn from industry and academic leaders about the role of science in the global economy, academia and the media. They will also visit centers of innovation and technology to broaden their understanding of the scientific enterprise. At the conclusion of the program, participants will travel to Boston for the 256th ACS National Meeting & Exposition: Nanoscience, Nanotechnology & Beyond, a platform for scientific professionals to present, publish and discuss the most exciting research discoveries in the field. To learn more about the CAS SciFinder Future Leaders program, visit www.cas.org/futureleaders.

CAS, a division of the American Chemical Society, is dedicated to the ACS vision of improving people's lives through the transforming power of chemistry. The CAS team of highly trained scientists finds, collects and organizes all publicly disclosed substance information, creating the world's most valuable collection of content that is vital to innovation worldwide. Scientific researchers, patent professionals and business leaders around the world rely on a suite of research solutions from CAS that enables discovery today to fuel tomorrow’s innovation.